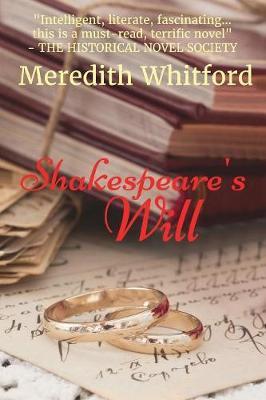 Anne Hathaway enjoys her friendship with the young William Shakespeare, who entertains her with his poems and his dreams of fame in the London theatres. But in the course of one country summer friendship becomes something more. Anne is pregnant and they must marry, and be stuck in Stratford and poverty forever. Or so William thinks. Hard-headed, intelligent Anne realises that if they are to be happy she must make his dreams come true. He must try his luck in London while she stays home to raise their children in boredom and loneliness. Five years later her gamble has paid off. With William becoming rich and increasingly famous, Anne can join him in his London world of actors, spies, dangerous politics and wily aristocrats. It is other dangers that now threaten their marriage and Anne’s love - a beautiful boy, and a dark, dangerous woman, both of whom want her husband. And he seems to want them. Now Anne must gamble again. If she leaves her husband, will he ever return to her? Will Shakespeare, in fact, love his wife? A sublime historical novel. It flows, it’s real, the characters are honest, and their actions are consistent with their belief systems and their deepest feelings… a joy. Whitford’s writing is impeccable. Historical fact melds seamlessly with historical fiction. - The Historical Novel Society. Fiction made deep with scholarship and references, but also, in itself, a terrific story that evokes the streets of both London and Stratford in the sixteenth century while providing a timeless tale of love, betrayal, genius and redemption. - Magdalena Ball, www.compulsivereader.com