The Origins of Complex Language: An Inquiry into the Evolutionary Beginnings of Sentences, Syllables and Truth 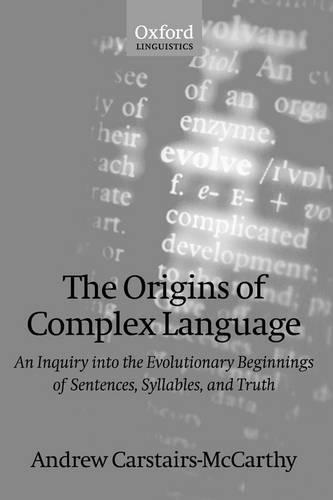 The Origins of Complex Language: An Inquiry into the Evolutionary Beginnings of Sentences, Syllables and Truth

This book proposes a new theory of the origins of human language ability and presents an original account of the early evolution of language. It explains why humans are the only language-using animals, challenges the assumption that language is a consequence of intelligence, and offers a new perspective on human uniqueness. The author draws on evidence from archaeology, linguistics, cognitive science, and evolutionary biology. Making no assumptions about the reader’s prior knowledge he first provides an introductory but critical survey of all sources of evidence for language evolution. He then considers what language itself reveals about its own and human origins and evolution. He shows that certain central aspects of language do not, unexpectedly, reflect what they are used for, are maladapted for their function. He considers why this should be, and argues that these odd aspects of language reveal important clues about its evolutionary origin. The Origins of Complex Language fulfils the promise of its title. In doing so it turns upside down conventional theories about the relation between cognition and expression, truth and reference, and the co-evolution of mind and body. Original in conception, brilliantly executed, stylishly written, this book will attract a wide range of readers interested in the evolution and origins of language.