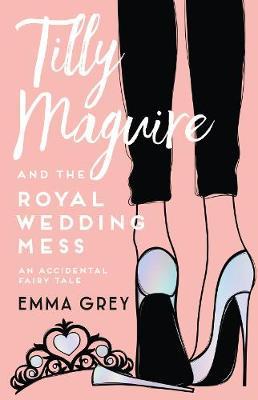 ROYAL WEDDING; ROYAL MESS! WHAT HAS 18-YEAR-OLD PR INTERN TILLY MAGUIRE LANDED HERSELF IN? Aspiring writer, 18-year-old Tilly Maguire, is a totally reformed ex-superfan of British boyband singer, Reuben Vaughan. Yeah, she was going to marry him when she was thirteen, but that fangirl phase is way in her past now, along with an unfortunate side ponytail and a weird obsession with galaxy leggings - ugh. Cringe! When her writing wins Tilly a six-week internship at a top London PR firm, she doesn’t expect to stumble from a long-haul flight straight into an A-list debacle of her own making, but these things happen. She proves to the entire world that jet lag and social media definitely don’t mix. Obviously, Tilly didn’t intend to get tangled in a ridiculous scandal involving the British royal family. She’s not the attention-seeking type! She’s just a socially awkward introvert, with a galloping case of anxiety made even worse after a high-profile run-in with the very last person she ever imagined she’d meet for real. Not on her gap year, anyway. And not like this! PRAISE ‘A pleasurable escape for any teen looking for a can’t-put-downable read’. - Books+Publishing, four stars