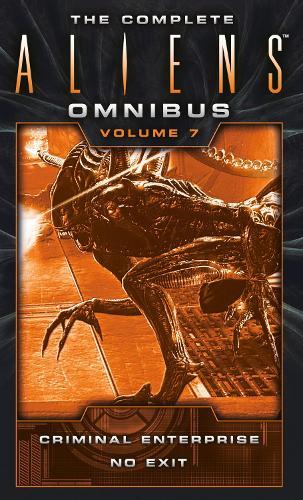 Collects two original Alien spin-offs: Criminal Enterprise by S.D. Perry and No Exit by B.K. Evenson. Criminal Enterprise by S.D. Perry Thomas Chase wakes up from cryosleep to his first day at a new job - as a pilot for a contraband drug company dropping a shipment on Fantasia, a planet hiding an elaborate drug manufacturing operation. Everything from synthetic heroin to MX7 is cooked here, in protected caves guarded by the savage Aliens. When Chase touches down on Fantasia, a chain of events begins that cannot be stopped. As criminals and competitors try to take over the drug empire from the dangerous kingpin, Chase and his brother Pete are caught in the crossfire…with the Aliens adding blood to the mix. No Exit by B. K. Evenson After thirty years of cryosleep, Detective Anders Kramm awakens to a changed world. The Alien threat has been subdued. Company interests dominate universal trade, with powerful men willing to do anything to assure dominance over other worlds. But Kramm has a secret. He knows why the Company killed its top scientists. He knows why the Aliens have been let loose on the surface of a contested planet. He knows that the Company will do everything it can to stop him from telling his secret to the world. Haunted by the brutal murder of his family, Kramm is set adrift amid billion-dollar stakes…with Aliens waiting around every corner.