Way Beyond the Blue: The Memoirs of Colonel Jackie Jackson, Usmcr as Told to Laine Boyd 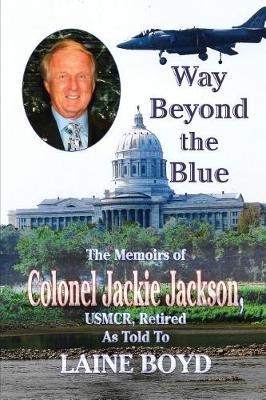 Way Beyond the Blue: The Memoirs of Colonel Jackie Jackson, Usmcr as Told to Laine Boyd

Integrity. Character. Courage. Faith. Heart. A click or two on Google will provide dozens of factual pages about Colonel Jack Jackson. Lists of awards, medals, accolades, and tributes pay homage to the many accomplishments of this extraordinary man. Way Beyond the Blue is not simply another rehashing of the easily-ascertained facts about Colonel Jackson’s deeds. Instead, readers are invited to see the heart behind the man. Jack Jackson has lived his life in service to God, others, and his country. A decorated Vietnam War veteran, two-term state representative, and test pilot for Boeing’s Harrier Jet, he is a man unafraid to consider sacrifice as anything less than his reasonable duty. From a small family farm in Indiana to rubbing elbows with presidents, Jack Jackson still holds fast the most important things in life. The stories he tells will take you from hold-your-breath harrowing excitement to tug-your-heart sorrow, poignant moments, joy, and contentment. As he shares the experiences and lessons that shaped his character and values, he does so with the confidence and humor of a man at home with his life’s work as he flies Way Beyond the Blue.