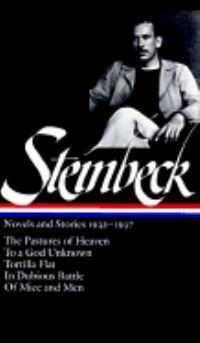 The Library of America presents for the first time in one volume Steinbeck’s early writings, which expressed his abiding concerns for community, social justice, and the elemental connection between nature and human society. In prose that blends the vernacular and the incantatory, the local and the mythic, these five works chart Steinbeck’s evolution into one of the greatest and most enduring popular of American novelists. The Pastures of Heaven(1932), a collection of interrelated stories, delineates the troubled inner lives and sometimes disastrous fates of families living in a seemingly tranquil California valley. The surface realism of Steinbeck’s first mature work is enriched by hints of uncanny forces at work beneath. Deep down it’s mine, right to the center of the world, says Salinas Valley farmer Joseph Wayne about his land in John Steinbeck'sTo a God Unknown(1933). A sense of primeval magic dominates the novel as the farmer reverts to pagan nature worship and begins a tortuous journey toward catastrophe and ultimate understanding. Steinbeck’s sympathetic depiction of the raffishpaisonsofTortilla Flat(1935), a ramshackle district above Monterey, first won him popular attention. The Flat’s tenderhearted, resourceful, mildly corrupt, over-optimistic characters are a triumph of life-affirming humor. In Dubious Battle(1936) plunges into the political struggle of the 1930s and paints a vigorous fresco of a migrant fruit-pickers' strike. Anticipating the collective portraiture ofThe Grapes of Wrath, Steinbeck poignantly traces the surges and shifts of group behavior. WithOf Mice and Men(1937), Steinbeck secured his status as one of the most influential American writers. Lennie and George, itinerant farmhands held together in the face of deprivation only by the frailest of dreams, have long since passed into American mythology. This novel, which Steinbeck called such a simple little thing, is now recognized as a masterpiece of concentrated emotional power. LIBRARY OF AMERICAis an independent nonprofit cultural organization founded in 1979 to preserve our nation’s literary heritage by publishing, and keeping permanently in print, America’s best and most significant writing. The Library of America series includes more than 300 volumes to date, authoritative editions that average 1,000 pages in length, feature cloth covers, sewn bindings, and ribbon markers, and are printed on premium acid-free paper that will last for centuries.