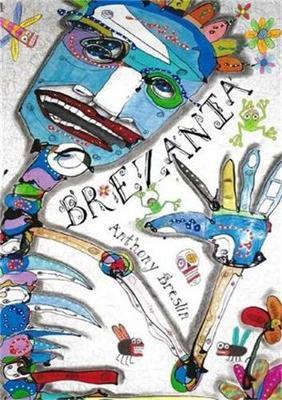 With his unique artistic talent and rhythmic rhyming verse, Anthony Breslin has created the wonderful world of Brezania, a world characterised by vibrant colour and inhabited by fantastical characters. Brezania, tells zany stories about this other world, illustrated with artwork created by Anthony that will delight and inspire children of all ages.
Anthony Breslin is an award winning Australian artist whose career spans over 24 years in a myriad of creative pursuits including painting, performance and poetry. He has created more than 50 solo exhibitions both nationally and internationally. He has produced and performed many large scale community and charity projects as he is passionate about working with community, marginalised groups and schools to build awareness of the importance of belonging and rites of passage. His first art book Frantic Bloom was published by Melbourne Books in 2010.
His new book, Brezania has been created during a time of incredible personal challenge over the last three years in hospital battling blood cancer and surviving a bone marrow transplant. He has not allowed this illness to dampen his spirit nor impede his vision and believes his creative expression has been enhanced by his life-threatening situation. It is truly amazing that he has created a world where kids can lose themselves in the wonderment of pure fatasmigorical characters.
Anthony has been involved with TLC for Kids since 2003 when he designed a super-sensory wonderland warehouse for terminally ill children and has raised money for them through his performance art ever since. Raising money for TLC for Kids and has been a motivating force behind Anthon'y passion for Brezania.

Welcome to the magical world of Brezania, a colourful, chaotic universe populated by vibrant creatures that embark upon adventures, and invent and play in their extraordinary environment.

Melbourne artist Anthony Breslin’s debut picture book is a remarkable compilation of handwritten poetic stories about imaginary characters, and accompanying paintings filled with vibrant energy. There is significant attention to detail – from the gorgeous endpapers to the handwritten text, and the painted backgrounds with little bugs, frogs and flowers adorning every page.

Breslin is an admirer of Dr Seuss and this influence is evidenced in both the rhyming text as well as the delightful, madcap selfcontained world that he has created. These wacky, weird and occasionally slightly gross characters are fascinating. This is a unique picture book that will appeal to children and adults alike. Brezania can be read to younger children aged 3+, but junior readers will also enjoy exploring this charming world.