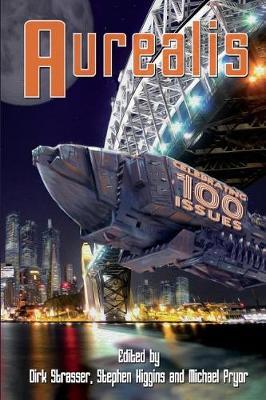 Aurealis has reached a milestone very few science fiction and fantasy magazines reach. This is our hundredth issue. And it’s three times the size of our normal issues. We have gone back and contacted everyone who appeared in Aurealis #1 in 1990 and asked them for a new story. Not everyone was contactable, and we’ve included some surprises, so strap yourself in and get ready to be blasted into a strange place that is somehow both the past and the future. David Tansey, the author of the first story we ever accepted for Aurealis leads the way with his clever, insightful and funny story, ‘The Cavity’. Find out why David, who at one point was the author with the most Aurealis credits, has only recently come out of a twenty-year writing hiatus. Michael Pryor’s original story was the first one to appear in Aurealis #1, and he is now not only one of the co-editors and co-publishers of Aurealis, he has become one of Australia’s most acclaimed SF authors and a much-loved writer of Young Adult and Children’s books. His story in this issue, ‘Shimmerflowers’, is a powerful and dark tale of lost innocence. Terry Dowling’s ‘The Madlock Chair’ is a mind-blowingly original piece which creates a sense of the truly alien and Alex (formerly Sue) Isle’s zombie story ‘All We Have Is Us’ is set in the most isolated capital city in the world. Geoffrey Maloney’s ‘The Bewitching of Dr Travidian’ is a funny, surprising and more than a little creepy pastiche of the Victorian sensational novel, co-editors Stephen Higgins (‘Forest/Tees’) and Dirk Strasser (‘The Mandelbrot Bet’) have contributed stories for the first time in many years, and Rebecca Birch rounds off the issue with her poignant tale, ‘Mayfire’. There’s an interview with Dirk Strasser about the history and future of Aurealis. Terry Wood also looks at the surprising possibilities of future technology in his article ‘Robotics, AI and the Impending Techno-Apocalypse’. And we feature the usual book reviews of latest releases and the quirky, hard to categorize ‘Secret History of Australia’.