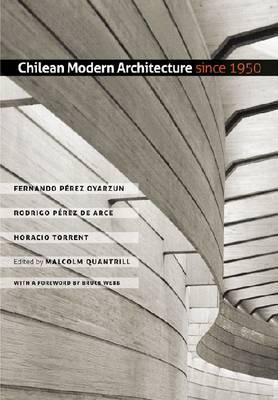 Chilean architecture-along with that of Sao Paolo and Mexico City-sets a benchmark for the intersection of modernism with vernacular influences in Latin America. Culture, landscape, and the geology of this earthquake-prone region have all served as important filters for the practice of post-1950s design in Chile. This volume introduces the modern architecture of Chile to readers in the United States. Looking primarily at domestic architecture as a lens for studying the larger movement, Fernando Perez Oyarzun considers the relationship between theory and practice in Chile. As he shows in his chapter, during the early 1950s the School of Valparaiso offered the possibility of developing experimental projects accompanied by theoretical statements. There, visual artists considered poetry the starting point of modern architecture and contributed their radically modern views to the design process of the project. Next, Rodrigo Perez de Arce examines the material context of architecture in Chile: the availability of materials and technologies, the frequency of violent earthquakes and related seismic activity, and the nation’s craft-based, labor-intensive building practices. He applies these considerations to a series of case studies to demonstrate how they interact with cultural, historical, economic, and even political influences. In the book’s final chapter, Horacio Torrent reviews the interplay between the architectonic culture and modern shapes that came into sharp focus in the 1950s in Chile. In another series of case studies, he highlights the formation of a system of concepts, thought processes, instruments, and values that have given Chilean architecture a certain singularity during the last fifty years.