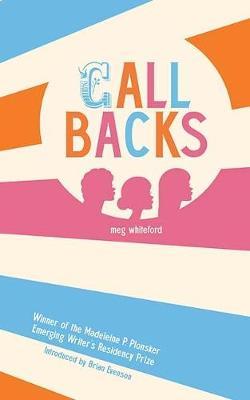 The Starling sisters, Pearl, Minny, and Esther are being raised by film, by what they hear on the radio, and by the hottest new pop culture phenomenon: television. They spend their feral trailer park childhood devising their own contortionist skits, daydreaming their own soap operas, and gushing over the latest episode of their favorite absurdist puppet show. After their lounge-singing mother flies the coop, the sisters run away to join an all-female revue in Northern California, run by the charismatic and power-hungry Bette Bunting. Their story is a portrait of a cultural moment in which television, a private viewing experience for the intimacy of home and nuclear families, precipitated the erosion of live, public performance and the mid-century American music hall. The glamour of Callbacks is vulgar and gimcrack, the humor crass and slapstick. The women on stage rebel against the male gaze and male domination in entertainment. Callbacks is inspired by the structure and tone of the serial sitcom format, with fragments of unresolved narrative, a focus on the ensemble, pattering dialogue, recurrence, fadeouts, and a denial of closure. The uncanny and carnivalesque create an entrancing tone that is parried by the tragic side of showbiz - the scrutiny of women aging in front of an audience, and the resulting fear of failure and obscurity that drives rivalry and family feuds.