Struggle for the Round Tops: Law’s Alabama Brigade at the Battle of Gettysburg 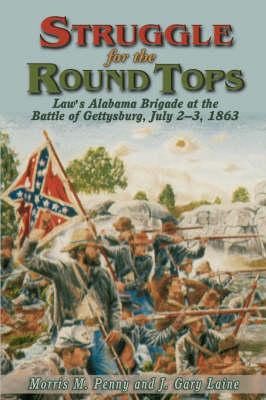 Struggle for the Round Tops: Law’s Alabama Brigade at the Battle of Gettysburg

Morris M. Penny and J. Gary Laine have produced a compelling story of Law’s Alabama Brigade’s attempt to wrest the Round Tops from Federal hands. In July 1863, Evander McIver Law, age 26, was one of Robert E. Lee’s most promising generals. His brigade of Alabamians shared the Army of Northern Virginia’s sense of invincibility. After a grueling 25-mile march to the battlefield, Law’s men made a valiant three-hour effort to gain control of the high ground on the Federal right. Struggle for the Round Tops describes the vicious fighting around Devil’s Den, in the Devil’s Kitchen, and the heartbreaking repulse from Little Round Top. Law’s Alabamians participated in the defense of the Confederate right on July 3 and delighted in unhorsing a number of Federal troopers in Farnsworth’s charge. Two days after it arrived, the brigade retired from the field with the realization that the Federals had matched their own fighting ability. Law himself departed with the seeds of discord planted that would ultimately culminate in a devastating feud between himself and Longstreet. Much has been written about the conduct of the Confederate commanders on July 2. Some historians have suggested that Law deliberately disobeyed an order to launch his assault up the Emmitsburg Road. The authors examine the implications of Lee’s orders and offer new insight into Hood'snd Law’s perspective of the situation and the leeway Hood assumed as a division commander.