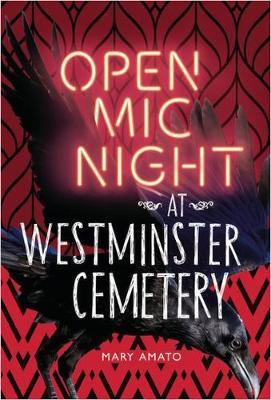 When Lacy wakes up dead in Westminster Cemetery, final resting place of Edgar Allan Poe, she’s confused. It’s the job of Sam, a young soldier who died in 1865, to teach her the rules of the afterlife and to warn her about Suppression–a punishment worse than death.
Lacy desperately wants to leave the cemetery and find out how she died, but every soul is obligated to perform a job. Given the task of providing entertainment, Lacy proposes an open mic, which becomes a chance for the cemetery’s residents to express themselves.
But Lacy is in for another shock when surprising and long-buried truths begin to emerge.

Edgar Allen Poe’s cemetery is certainly the last place a newly deceased person would like to be interred within, with ‘unbreakable rules’ that, if broken, can result in you being nailed into a coffin all over again. Freshly dead Lacy Brink is the first addition to the hallowed plots of Westminster Cemetery in over a century, bringing with her a cosmopolitan dress sense, most unholy vocabulary and thoroughly modern outlook on the afterlife that certainly couldn’t strike a more controversial note with the cemetery’s long-established rulebook.

Mary Amato creates a poignant afterlife and stokes a visceral connection to characters with whom we haven’t previously been acquainted, while also reanimating a few others that are quite recognisable (caw the raven, nevermore!). An impressive combination of a novel and a play, this book unravels the vast emotions we would all have in the wake of an untimely death, but with the added complications of being confined to a graveyard society in which residents simply cannot express emotion. Enter Lacy’s ‘open mic’ initiative.

I loved reading about Lacy’s conflict with the conservative factions and her newfound allegiances (once she acclimatises to being dead), and, ultimately, following as she finds her purpose in this chamber of comic misery: to provide a platform for revealing the long-kept secrets with which her charming counterparts were buried.

Timothy de Sousa works as a bookseller at Readings Kids.