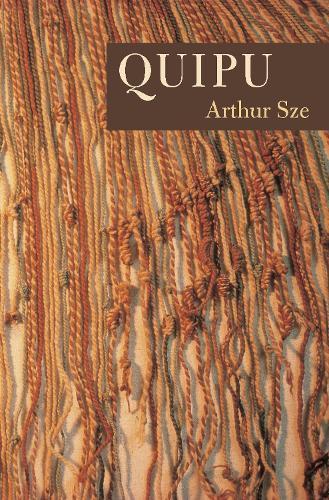 Sze brings together disparate realms of experience–astronomy, botany, anthropology, Taoism-and observes their correspondences with an exuberant attentiveness. -The New Yorker Sze’s poems seem dazzled and haunted by patterns. -The Washington Post Quipu was a tactile recording device for the pre-literate Inca, an assemblage of colored knots on cords. In his eighth collection of poetry, Arthur Sze utilizes quipu as a unifying metaphor, knotting and stringing luminous poems that move across cultures and time, from elegy to ode, to create a precarious splendor. Revelation never comes as a fern uncoiling a frond in mist; it comes when I trip on a root, slap a mosquito on my arm. We go on, but stop when gnats lift into a cloud as we stumble into a bunch of rose apples rotting on the ground. Long admired for his poetic fusions of science, history, and anthropology, in Quipu, Sze’s lines and language are taut and mesmerizing, nouns can become verbs- where is passion that orchids the body? -and what appears solid and -stable may actually be fluid and volatile. A point of exhaustion can become a point of renewal: it might happen as you observe a magpie on a branch, or when you tug at a knot and discover that a grief disentangles, dissolves into air. Renewal is not possible to a calligrapher who simultaneously draws characters with a brush in each hand; it occurs when the tip of a brush slips yet swerves into flame … Arthur Sze is the author of eight books of poetry and a volume of translations. He is the recipient of an Asian American Literary Award, a Lannan Literary Award, and fellowships from the Witter Bynner Foundation and the National Endowment for the Arts. He teaches at the Institute of American Indian Arts and lives in New Mexico.