Improbable Destinies: How Predictable is Evolution? 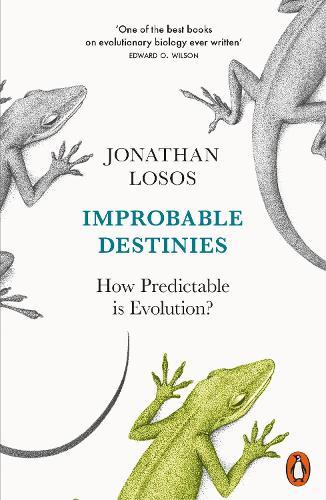 Improbable Destinies: How Predictable is Evolution?

A dazzling tour of evolution in action that sheds light on one of the greatest debates in science The natural world is full of fascinating instances of convergence- phenomena like eyes and wings and tree-climbing lizards that have evolved independently, multiple times. Convergence suggests that evolution is predictable, and if we could replay the tape of life, we would get the same outcome. But there are also many examples of contingency, cases where the tiniest change - a random mutation or an ancient butterfly sneeze - caused evolution to take a completely different course. In Improbable Destinies, renowned researcher Jonathan Losos reveals what the latest breakthroughs in evolutionary biology tell us about one of the greatest ongoing debates in science. Evolution can occur far more rapidly than Darwin expected, which has opened the door to something that was previously thought impossible- experimental studies of evolution in nature. Drawing on his own work with anole lizards on the Caribbean islands, as well as studies of guppies, foxes, field mice and others being conducted around the world, Losos reveals just how rapid and predictable evolution can be. By charting the discoveries of the scientists who are rewriting our understanding of evolutionary biology, Improbable Destinies will change the way we think and talk about evolution.