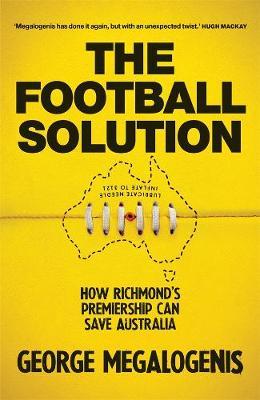 In a characteristically sweeping and entertaining story, George Megalogenis reveals how football has been shaped by the nation that invented it and how the game we love, in turn, might help resolve Australia’s political impasse.
A sport unlike any other in the world, football has always been Australia’s bellwether. But at a time when politics is increasingly conducted like sports - full of one-eyed tribalism, captain’s calls and policy dictated by the Newspoll scoreboard - football is the one institution that’s more relevant than ever.
And it’s Richmond that’s out in front of the pack. Before it could win the 2017 premiership, the club had to change how it thought about good leadership. By weaving together the game’s conflicted history, a sharp-eyed analysis of Richmond’s off-field turbulence and his own love of the Tigers, Megalogenis reveals just how Richmond found a new way to win - and how Australia might do the same.
‘Megalogenis has done it again, but with an unexpected twist.‘ - HUGH MACKAY
‘A public intellectual who barracks for Richmond argues that the Tigers’ 2017 flag contains the seeds of our national resurgence. That’s some footy argument…‘ - MARTIN FLANAGAN
‘Richmond are not yet ahead in the premiership wars, but through inspired leadership, they’re streets ahead in the culture wars.’ - BARRIE CASSIDY
‘Manages the incredible feat of igniting hope again for something called Australia. Whatever football code you follow, or even if you don’t follow sport at all, I urge you to read this book. It’s bracingly sane and beautifully told.‘ - CHRISTOS TSIOLKAS
$32.99Add to basket ›