Spooked!: How a Radio Broadcast and The War of the Worlds Sparked the 1938 Invasion of America 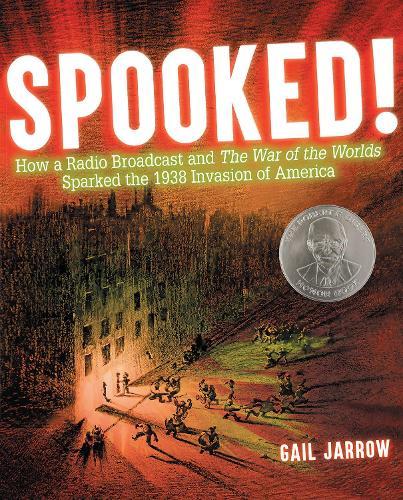 Spooked!: How a Radio Broadcast and The War of the Worlds Sparked the 1938 Invasion of America

In this nonfiction title for young readers ages 10 to 14, acclaimed author Gail Jarrow explores in riveting detail the famous War of the Worlds radio broadcast from 1938; she highlights the artists behind the broadcast, the broadcast itself, the aftermath, and the repercussions of fake news today. Robert F. Sibert Informational Honor Book School Library Journal Best Book of the Year Booklist Editors' Choice Washington Post Best Children’s Book BCCB Blue Ribbon A Chicago Public Library Best of the Best Books This book for young readers explores in riveting detail the false panic created by the famous War of the Worlds radio broadcast from 1938-as well as the repercussions of fake news today. On the night of October 30, 1938, thousands of Americans panicked when they believed that Martians had invaded Earth. What appeared to be breaking news about an alien invasion was in fact a radio drama based on H. G. Wells’s War of the Worlds, performed by Orson Welles and his Mercury Theatre players. Some listeners became angry once they realized they had been tricked, and the reaction to the broadcast sparked a national discussion about fake news, propaganda, and the role of radio. In this compelling nonfiction chapter book, Gail Jarrow explores the production of the broadcast, the aftermath, and the concept of fake news in the media.