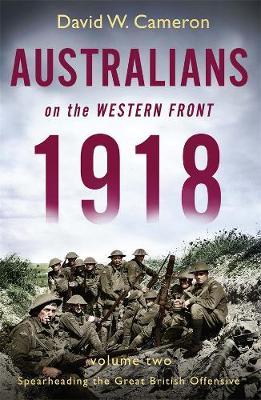 David Cameron’s landmark, two-volume Australians on the Western Front 1918 concludes with the story of the central role Australian troops played in the final German defeat Following on from volume 1 of Australians on the Western Front 1918- Resisting the Great German Offensive, volume 2, Spearheading the Great British Offensive, concludes with a detailed account of the final battles of World War I and the defeat of German armed forces on the Western Front. In compelling detail, David W. Cameron recounts the military successes and challenges of the Australian Army Corps, led by Lieutenant General John Monash, during a number of key battles, including the Battle of Hamel on 4 July; the Battle of Amiens on 8 August, and the Battle for Mont St Quentin and Peronne in September; culminating in the week-long battles for the Hindenburg Outpost Line and the Hindenburg Line itself, during which many Australian and American troops tragically lost their lives just as the war was finally drawing to a close. Ultimately, however, the breaking of the Hindenburg Line by Australian, Canadian, British and American troops delivered a crucial blow to the German army, who surrendered unconditionally to the Allies one month later. This book once again draws on the diaries and letters of the Australian soldiers on the battlefields to piece together the story of their heroic actions against enemy forces, placing them within the broader context of the ‘war to end all wars’.