If Only They Didn’t Speak English: Notes From Trump’s America 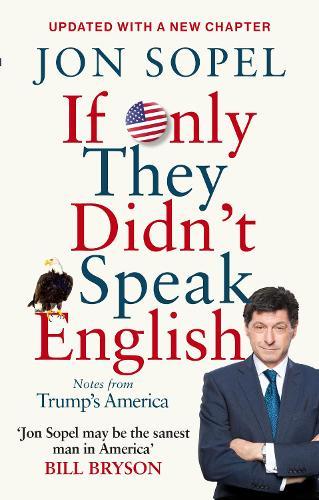 If Only They Didn’t Speak English: Notes From Trump’s America

The definitive book on the making of Trump’s America from the BBC’s North America Editor, Jon Sopel. Now updated with an exclusive new chapter. ‘You see, if only they didn’t speak English in America, then we’d treat it as a foreign country - and probably understand it a lot better’‘the sanest man in America’ - Bill Bryson'Jon Sopel nails it' - Emily Maitlis**With a brand new chapter, charting Trump’s first year in power**As the BBC’s North America Editor, Jon Sopel has had a pretty busy time of it lately. In the time it’s taken for a reality star to go from laughing stock to leader of the free world, Jon has travelled the length and breadth of the United States, experiencing it from a perspective that most of us could only dream of- he has flown aboard Air Force One, interviewed President Obama and has even been described as ‘a beauty’ by none other than Donald Trump.Through music, film, literature, TV and even through the food we eat and the clothes that we wear we all have a highly developed sense of what America is and through our shared, tangled history we claim a special relationship. But America today feels about as alien a country as you could imagine. It is fearful, angry and impatient for change.In this fascinating, insightful portrait of American life and politics, Jon Sopel sets out to answer our questions about a country that once stood for the grandest of dreams, but which is now mired in a storm of political extremism, racial division and increasingly perverse beliefs.