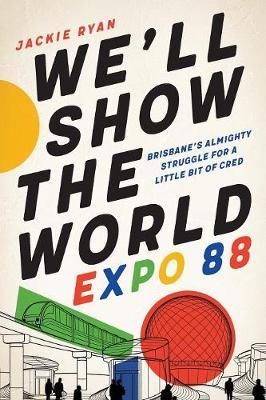 World Expo 88 was the largest, longest, and strangest of Australia’s bicentennial events. A shiny 1980s amalgam of shopping mall, cultural precinct, theme park, travelogue, and rock concert, the Expo 88 behemoth is commonly credited as the catalyst for Brisbane’s ‘coming of age'. So how did one long and expensive party change a city forever?
We’ll Show the World lifts the curtain on Expo 88. It explores the shifting social and political environment in which Expo 88 was conceived, planned, and executed - an environment shaped as much by Queensland’s controversial premier Joh Bjelke-Petersen as it was by those who reacted against his protracted and authoritarian reign. This book considers how an event once mocked as a ‘Joh Show' became the people’s party, and how something initially greeted with outrage, scepticism, or indifference came to mean so much to so many.
Published to coincide with the celebration of Expo’s 30th birthday, We’ll Show the World is the story of how, to Brisbane, Expo was personal.
$32.95Add to basket ›

END_OF_DOCUMENT_TOKEN_TO_BE_REPLACED

The Battle of Long Tan: The Company Commanders Story