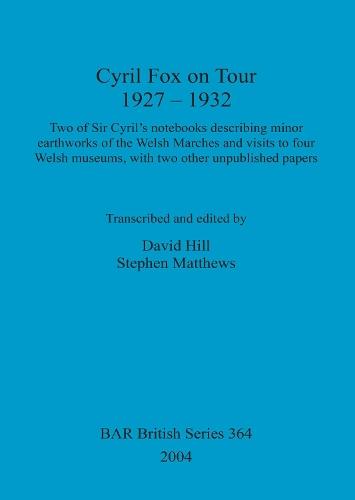 Most of Sir Cyril Fox’s papers are held in the National Museum of Wales, but two notebooks, which form the bulk of this volume, have a curious history. The first, which covers the years October 1927 to July 1930, contains a variety of material, but significantly it included his notes on a number of dykes and other features close to or associated with Offa’s Dyke which he was surveying at the time. The second, relating only to the summer of 1932, was limited to his surveys of six groups of short dykes, with an endpiece on Wigmore Castle. After 1932, Fox lost interest in these shorter dykes and passed the two notebooks to Noel Jerman, who retained them until in turn passing them on to the Offa’s Dyke project at the Extra-Mural Department of Manchester University in the 1980s: they are eventually to be deposited in the National Museum of Wales. The first notebook contained a few other papers. The most interesting is a part transcript of an impromptu lecture that Fox gave to Miss L. F. Chitty on the way down from the Kerry Ridgeway. To this collection the author has added an unpublished note of Fox’s describing an excavation he made at Tallard’s Marsh, near Chepstow, which he believed to be the southern extremity of Offa’s Dyke. The editors' intention has been to reproduce this material, with an expansion of Fox’s sometimes difficult abbreviations, and add comparative reports from a date as near as possible to Fox’s own, with illustrative aerial photographs, where they could be obtained.