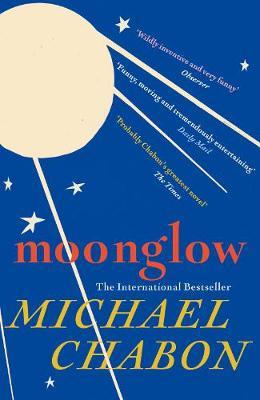 Pulitzer Prize-winning author Michael Chabon delivers another literary masterpiece: a novel of truth and lies, family legends and existential adventure - and the forces that work to destroy us.
In 1989, fresh from the publication of his first novel, The Mysteries of Pittsburgh, Michael Chabon traveled to his mother’s home in Oakland, California, to visit his terminally ill grandfather. Tongue loosened by powerful painkillers, memory stirred by the imminence of death, Chabon’s grandfather shared recollections and told stories the younger man had never heard before, uncovering bits and pieces of a history long buried and forgotten.
Moonglow unfolds as the deathbed confession, made to his grandson, of a man the narrator refers to only as  my grandfather.
It is a tale of madness, of war and adventure, of sex and desire and ordinary love, of existential doubt and model rocketry, of the shining aspirations and demonic underpinnings of American technological accomplishment at mid-century and, above all, of the destructive impact - and the creative power - of the keeping of secrets and the telling of lies.
A gripping, poignant, tragicomic, scrupulously researched and wholly imaginary transcript of a life that spanned the dark heart of the twentieth century, Moonglow ranges from the Jewish slums of prewar South Philadelphia to the invasion of Germany, from a Florida retirement village to New York’s Wallkill Prison, from the heyday of the space program to the twilight of ‘the American Century’.
Collapsing an era into a single life and a lifetime into a single week, Moonglow is a lie that tells the truth, a work of fictional non-fiction, an autobiography wrapped in a novel disguised as a memoir. Moonglow is Chabon at his most daring, his most moving, his most Chabonesque.

In Moonglow, Michael Chabon does what Chabon does best, and with obvious relish. That is, using his familiar originality and postmodern cleverness, he presents the fiction as an archive, making solid, quotable, and factual that which is utterly, playfully, and blatantly untrue. Anyone who read (and re-read, and then went back again) and adored Chabon’s 2001 Pulitzer Prize-winning The Amazing Adventures of Kavalier & Clay will recognise this right away. His play with truth, fiction, characters, and history is central in Moonglow, as it was in Kavalier & Clay and The Yiddish Policemen’s Union. But this time Chabon turns this treatment onto himself, to examine and imperfectly represent his own family history. In so doing, he illuminates questions of how we read our family’s history, and how we listen to and remember and re-tell these personal origin stories.

Moonglow is told from the perspective of the narrator, Michael Chabon, as his grandfather, terminally ill and under the influence of painkillers, begins to recollect and narrate tales of his youth, his wartime adventures, and the little histories of each member of his family. Chabon, having never heard these stories before, makes notes and recordings. Later, now, when writing this novel-as-memoir, our narrator fills in the gaps where notes have been lost and embellishes the details to find his own truth in the telling.

This epically sprawling yet precise, tight, charge of a novel traverses pre-war South Philadelphia to the invasion of Germany to a Florida retirement village. The genius of the writing here in Chabon’s latest nostalgia project is that he is able to contain all time and all space within a single moment in time or a single space of action. His application of repeated narrative motifs is executed with the utmost skill and poise, representing true insight and the immense depth of a longing to connect with a personal, familial, inherited, or universal point of origin.