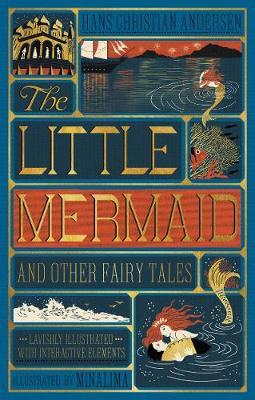 Featuring beloved characters such as the Little Mermaid, Thumbelina, and the Snow Queen, a deluxe full-color edition of Hans Christian Andersen’s classic fairytales, illustrated with stunning drawings and interactive artwork from MinaLima, the award-winning design studio behind the graphics for the Harry Potter film franchise-the perfect companion for fans of the Disney live-action film The Little Mermaid which will include a mix of songs from Hamilton’s Lin-Manuel Miranda and Alan Menken.

Nearly two hundred years after its publication in 1837, Hans Christian Andersen’s timeless fairytales continue to inspire young imaginations. This beautiful unabridged edition brings together many of the Danish writer’s favorite stories that have become literary classics, including: The Little Mermaid , Thumbelina, The Snow Queen, The Princess and the Pea, The Ugly Duckling, The Emperor’s New Clothes, and more.

The thirteen stories in The Little Mermaid and Other Fairy Tales are illustrated with specially commissioned artwork and ten exclusive interactive features. Gorgeously designed, this keepsake illustrated edition-the fourth book in Harper Design’s series of reimagined children’s classics-will be treasured by readers of all ages for generations to come.

END_OF_DOCUMENT_TOKEN_TO_BE_REPLACED

Anemone is not the Enemy

At the Dog Park