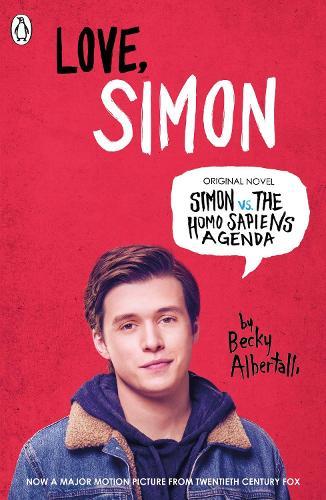 Straight people should have to come out too. And the more awkward it is, the better. Simon Spier is sixteen and trying to work out who he is - and what he’s looking for. But when one of his emails to the very distracting Blue falls into the wrong hands, things get all kinds of complicated.
Because, for Simon, falling for Blue is a big deal.. It’s a holy freaking huge awesome deal.

Why do only gay people have to come out? Shouldn’t straight people have an awkward time declaring themselves too? So thinks sixteen-year-old Simon Spier, the charming hero of this coming of age (and coming out) story. Simon has lots of friends and is involved in the theatre production at school, but he doesn’t quite know how to tell them that he is gay. When another student starts blackmailing him after discovering his secret, Simon finds events spiralling out of his control. Meanwhile, he thinks he might be falling in love online but he doesn’t know the true identity of his email lover. Can he discover it before he is publicly humiliated by his blackmailer? This is a charming novel, reminiscent of The Perks of Being a Wallflower, which will have you cheering for Simon on the sidelines and asking ‘Why shouldn’t everyone have to come out?’

The Mystery of the Magic Stones: Polly and Buster Book Two

How Did I Get Here?