Boqueria: A Cookbook, from Barcelona to New York 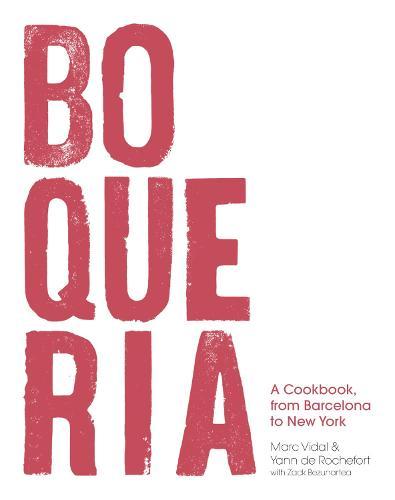 Boqueria: A Cookbook, from Barcelona to New York

The definitive cookbook of the celebrated Boqueria restaurants, inspired by the best of Barcelona tapas.
New York City’s famed Boqueria restaurants capture the essence of Barcelona tapas - that savory, salt-crackling, lip-smacking bite that pairs so well with wine and friends. For Boqueria: A Cookbook, from Barcelona to New York, chef Marc Vidal teams up with restaurateur Yann de Rochefort and food writer Genevieve Ko to tell the story of the restaurant and its signature recipes, all deeply rooted in Barcelona culture and cuisine, from traditional tapas like mouth-watering patatas bravas, Iberian ham croquettes, blistered green peppers, and bacon-wrapped dates, to seasonal favorites like garlicky sauteed shrimp, Spanish meatballs, and classic, saffrony seafood paella.
Detailed insights into the history and the day-to-day life of the restaurant complete this sumptuous cookbook, where the recipes take center stage, accompanied by stunning food photography, and vibrant portraits of Vidal’s muse, the city of Barcelona, including its legendary fresh market, La Boqueria.
$14.95Add to basket ›

A Day at elBulli

The Art of Pasta

SUQAR: Desserts and Sweets from the Modern Middle East