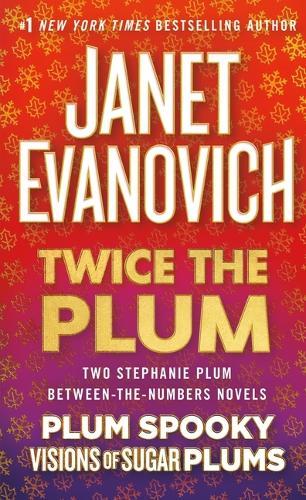 Two Between-the-Numbers novels from #1 bestselling author Janet Evanovich–twice the Plum! PLUM Spooky Bounty hunter Stephanie Plum usually finds a way to get her man. But this time, she’s set to join forces with Diesel–whose special skills include tracking men and pleasing women–to get the job done. Together, they will hunt down the notorious Martin Munch through the Pine Barrens and come face to face with the legendary Jersey Devil, prowling above the treetops in the dark of night, and find a way to survive cranberry bogs, sand in their underwear, too many monkeys to count…and, of course, each other. VISIONS OF SUGAR PLUMS ‘Tis the season, sure, but nothing’s looking merry for Fugitive Apprehension Agent Stephanie Plum. She hasn’t gotten a tree, nor any presents. There’s not a twinkle light anywhere to be seen in her apartment…and there’s a stranger in her kitchen. Which isn’t so unusual–Stephanie is always greeting felons, creeps, and lunatics at her door. But this guy is mysterious, and HOT. His name is Diesel. What is he doing here? Can he help Stephanie find a little old toy maker who has skipped out on his bail right before the holidays? What about a bunch of nasty elves? Get out your plastic reindeer, strap on your jingle bells, and get ready to celebrate the holidays–Jersey style. Tart and hilarious…will leave fans hungry for the next juicy Plum-a-Thon. –Publishers Weekly