Immanence and Immersion: On the Acoustic Condition in Contemporary Art 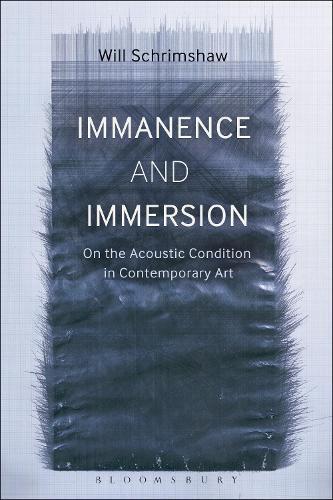 Immanence and Immersion: On the Acoustic Condition in Contemporary Art

Immersion is the new orthodoxy. Within the production, curation and critique of sound art, as well as within the broader fields of sound studies and auditory culture, the immersive is routinely celebrated as an experiential quality of sound, the value of which is inherent yet strengthened through dubious metaphysical oppositions to the visual. Yet even within the visual arts an acoustic condition grounded in Marshall McLuhan’s metaphorical notion of acoustic space underwrites predispositions towards immersion. This broad conception of an acoustic condition in contemporary art identifies the envelopment of audiences and spectators who no longer perceive from a distance but immanently experience immersive artworks and environments. Immanence and Immersion takes a critical approach to the figures of immersion and interiority describing an acoustic condition in contemporary art. It is argued that a price paid for this predisposition towards immersion is often the conceptual potency and efficacy of the work undertaken, resulting in arguments that compound the marginalisation and disempowerment of practices and discourses concerned with the sonic. The variously phenomenological, correlational and mystical positions that support the predominance of the immersive are subject to critique before suggesting that a stronger distinction between the often confused concepts of immersion and the immanence might serve as a means of breaking with the figure of immersion and the circle of interiority towards attaining greater conceptual potency and epistemological efficacy within the sonic arts.