Dropped Threads 2: More of What We Aren’t Told 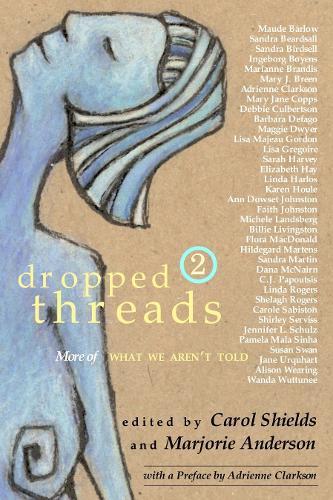 Dropped Threads 2: More of What We Aren’t Told

The idea for Dropped Threads: What We Aren’t Told came up between Carol Shields and longtime friend Marjorie Anderson over lunch. It appeared that after decades of feminism, the women’s network still wasn’t able to prevent women being caught off-guard by life. There remained subjects women just didn’t talk about, or felt they couldn’t talk about. Holes existed in the fabric of women’s discourse, and they needed examining. They asked thirty-four women to write about moments in life that had taken them by surprise or experiences that received too little discussion, and then they compiled these pieces into a book. It became an instant number one bestseller, a book clubs' favourite and a runaway success. Dropped Threads, says Anderson, tapped into a powerful need to share personal stories about life’s defining moments of surprise and silence. Readers recognized themselves in these honest and intimate stories; there was something universal in these deeply personal accounts. Other stories and suggestions poured in. Dropped Threads would clearly be an ongoing project. Like the first volume, Dropped Threads 2 features stories by well-known novelists and journalists such as Jane Urquhart, Susan Swan and Shelagh Rogers, but also many excellent new writers including teachers, mothers, a civil servant, a therapist. This triumphant follow-up received a starred first review in Quill and Quire magazine, which called it compassionate and unflinching. The book deals with such difficult topics as loss, depression, disease, widowhood, violence, and coming to terms with death. Several stories address some of the darker sides of motherhood: - A mother describes how, while sleep-deprived and in a miserable marriage, she is shocked to find infanticide crossing her mind. - Another woman recounts a memory of her alcoholic mother demanding the children prove their loyalty in a terrifying way. - A woman desperate for children refers to the bleak truth as: Another Christmas of feeling barren. Narrating the fertility treatment she undergoes, the hopes dashed, she is amusing in retrospect and yet brutally honest. While they deal with loss and trauma, the pieces show the path to some kind of acceptance, showing the authors' determination to learn from pain and pass on the wisdom gained. The volume also covers the rewards of learning to be a parent, choosing to remain single, or fitting in as a lesbian parent. It explores how women feel when something is missing in a friendship, how they experience discrimination, relationship challenges, and other emotions less easily defined but just as close to the bone: - Alison Wearing in My Life as a Shadow subtly describes allowing her personality to be subsumed by her boyfriend’s. - Pamela Mala Sinha tells how, after suffering a brutal attack, she felt self-hatred and a longing for retribution. - Dana McNairn talks of her uncomfortable marriage to a man from a different social background: I wanted to fit in with this strange, wondrous family who never raised their voices, never swore and never threw things at one another. Humour, a confiding tone, and beautiful writing elevate and enliven even the darkest stories. Details bring scenes vividly to life, so we feel we are in the room with Barbara Defago when the doctor tells her she has breast cancer, coolly dividing her life into a ‘before and after.’ Lucid, reflective and poignant, Dropped Threads 2 is for anyone interested in women’s true stories.