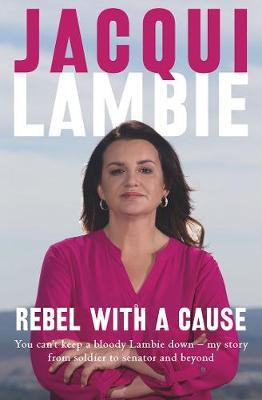 Jacqui Lambie has always stood out from the mainstream of Australian politicians - even in the announcement of her retirement from the Senate after being caught up in the ‘Citizenship Crisis’. In stark contrast to other politicians ducking and weaving before finally being given their marching orders by the High Court, Jacqui copped it sweet and voluntarily walked as soon as the UK Home Office informed her she was a dual national. Her no-nonsense response that politicians who have breached Section 44 of the Constitution should just ‘suck it up’, deal with their mistakes and run for Parliament again is typical of a simple common-sense approach to issues that endears her to her legion of fans and followers.
During her time in Parliament Jacqui was the most authentic Australian voice in the Senate. Love her or hate her, you can’t deny she’s totally heartfelt and unscripted. In an age when populism in politics often just means a backlash against the existing order, Jacqui actually stood for issues: a better deal for our military veterans, and a better system of care for those afflicted by the scourge of ice addiction. These are real issues for her, things she’s lived through, and not just hot-button issues raised by focus groups.
So for anyone who knows Jacqui, her resignation from the Senate is just an interruption in her unique career representing Australians who’ve previously had little access to the corridors of power: the veterans, the single mums, the welfare recipients, the families of ice addicts. In one form or another she’ll be back.
Her autobiography is not a political book. In fact, politics barely gets a mention until the final chapters. It’s the story of her life as an ordinary working class girl from Tasmania, and her journey through the army, her enforced medical retirement after 10 years when she suffered a horrendous back injury, her fight to get adequate treatment and compensation from the DVA, her struggles to raise two kids as a single mother on welfare, her son’s ice addiction, the slow rebuilding that saw her determined to prevent other people experiencing the bureaucratic-inflicted torment that she was forced to survive, her roller coaster ride as a politician, and finally her resignation from the Senate and her plans for the future.
The subject matter is real and sometimes raw, but Jacqui handles it with humour, honesty and dignity. It’s safe to say that there’s never, ever been a politician’s memoir like this in Australia.
$29.99Add to basket ›