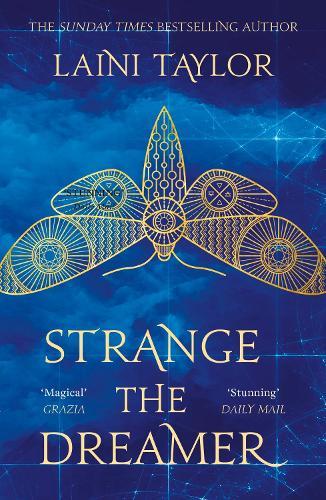 The dream chooses the dreamer.
Since he was five years old, Lazlo Strange has been obsessed with the mythic lost city of Weep, but it would take someone bolder than he to go in search of it. Then a stunning opportunity presents itself - in the person of a hero called the Godslayer and a band of legendary warriors, and he has to seize his chance or lose his dream forever.
What happened in Weep to cut it off from the world? What did the Godslayer slay that went by the name of god? And what is the mysterious problem he now seeks help in solving?
The answers await in Weep, but so do many more mysteries - including the blue-skinned goddess who visits Lazlo’s dreams…

Somewhere in the world (or perhaps another world), a mythical and wondrous city closed its borders to outsiders, had its name stolen, and is now only known as Weep. Weep is the obsession of choice of 19-year-old Lazlo Strange, a foundling raised by monks and apprenticed to the great city library of Zosma. Somewhere far away from Zosma, a young woman called Sarai grows up with her four siblings in a walled-off citadel, burdened by an idiosyncratic magical power and the past actions of her family.

Strange the Dreamer is the eighth book by Laini Taylor, and it’s the kind of odd, funny, romantic and utterly heartbreaking novel that only she could write. The story depends on the tantalising convergence of two separate storylines – events or facts that appear whimsical or arbitrary at first later emerge as crucial and connected.

Lazlo, whose existence has been extremely sheltered, is recruited to an intrepid expedition of rag-tag inventors and scientists from all over the world, travelling to solve a vexing problem. Sarai is caught in the middle of a struggle for power within her citadel family, and is in desperate need of human connection.

Existing fans will be satisfied to find that Strange the Dreamer has Taylor’s trademark mix of lush writing, heady romance, strange magic, brutal acts of war and dry humour. It explores trauma, vengeance, fear of the other and what it means to have, and to lose, autonomy over your mind and body. There will be a sequel, and the ending makes this all too clear. One crisis has been averted (but not without casualties), and a new crisis has already risen in its wake. Strange the Dreamer is highly recommended for teenagers aged 14 years old, all the way through to adult fantasy readers.

END_OF_DOCUMENT_TOKEN_TO_BE_REPLACED

A magical new world and a whole host of stunning characters to take to your hearts in this brand new, un-putdownable novel from Sunday Times bestselling author Laini Taylor.