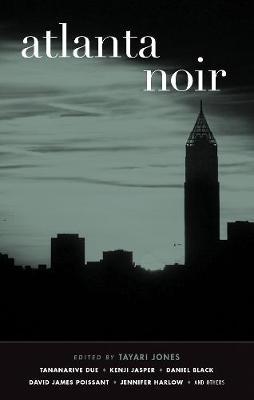 Kenji Jasper’s A Moment of Clarity at the Waffle House nominated for a 2018 Edgar Award for Best Short Story! Atlanta has its share, maybe more than its share, of prosperity. But wealth is no safeguard against peril…Creepy as well as dark, grim in outlook…Hints of the supernatural may make these tales…appealing to lovers of ghost stories. –Kirkus Reviews These stories, most of them by relative unknowns, offer plenty of human interest…All the tales have a Southern feel. –Publishers Weekly Jones, author of Leaving Atlanta, returns to the South via Akashic’s ever-growing city anthology series. The collection features stories from an impressive roster of talent including Jim Grimsley, Sheri Joseph, Gillian Royes, Anthony Grooms and David James Poissant. The 14 selections each take place in different Atlanta neighborhood. –Atlanta-Journal Constitution Now comes Atlanta Noir, an anthology that masterfully blends a chorus of voices, both familiar and new, from every corner of Atlanta…The magic of Atlanta Noir is readily apparent, starting with the introduction Jones pens. It doesn’t rest solely upon the breadth of writers but on how their words, stories and references are so Atlanta–so very particular, so very familiar and so very readily, for those who know the city, nostalgic. And for those who don’t? The sense of place it captures inspires a desire to get to know Atlanta and its stories. –ArtsATL Akashic Books continues its award-winning series of original noir anthologies, launched in 2004 with Brooklyn Noir. Each book comprises all new stories, each one set in a distinct neighborhood or location within the respective city. This much-anticipated and long-overdue installment in Akashic’s Noir Series reveals many sides of Atlanta known only to its residents. Brand-new stories by: Tananarive Due, Kenji Jasper, Tayari Jones, Dallas Hudgens, Jim Grimsley, Brandon Massey, Jennifer Harlow, Sheri Joseph, Alesia Parker, Gillian Royes, Anthony Grooms, John Holman, Daniel Black, and David James Poissant. From the introduction by Tayari Jones: Atlanta itself is a crime scene. After all, Georgia was founded as a de facto penal colony and in 1864, Sherman burned the city to the ground. We might argue about whether the arson was the crime or the response to the crime, but this is indisputable: Atlanta is a city sewn from the ashes and everything that grows here is at once fertilized and corrupted by the past… These stories do not necessarily conform to the traditional expectations of noir…However, they all share the quality of exposing the rot underneath the scent of magnolia and pine. Noir, in my opinion, is more a question of tone than content. The moral universe of the story is as significant as the physical space. Noir is a realm where the good guys seldom win; perhaps they hardly exist at all. Few bad deeds go unrewarded, and good intentions are not the road to hell, but are hell itself…Welcome to Atlanta Noir. Come sit on the veranda, or the terrace of a high-rise condo. Pour yourself a glass of sweet tea, and fortify it with a slug of bourbon. Put your feet up. Enjoy these stories, and watch your back.