OCR Ancient History AS and A Level Component 1: Greece 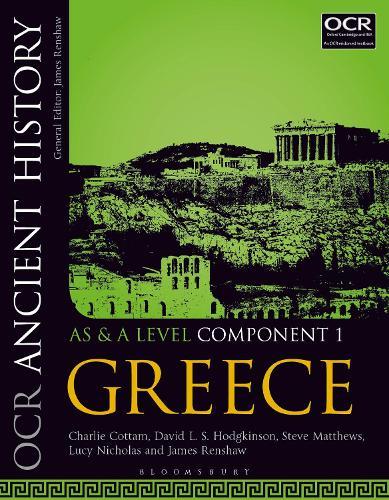 OCR Ancient History AS and A Level Component 1: Greece

This textbook is endorsed by OCR and supports the specification for AS and A-Level Ancient History (first teaching September 2017). It covers the whole of Component 1, both the compulsory Period Study and the three optional Depth Studies: Period Study: Relations between Greek states and between Greek and non-Greek states, 492-404 BC by Steve Matthews and James Renshaw Depth Study: The Politics and Society of Sparta, 478-404 BC by Charlie Cottam Depth Study: The Politics and Culture of Athens c. 460-399 BC by David L. S. Hodgkinson and James Renshaw Depth Study: The Rise of Macedon, 359-323 BC by Lucy Nicholas How and why did a small group of city states defy the might of the Persian Empire? Why did the same city states subsequently descend into 60 years of conflict among themselves? Were Sparta and Athens very different? How did Alexander later redefine the Greek world? These are the sort of questions that you are required to consider for A-Level Ancient History. This book investigates how the birth of democracy and the defeat of Persia allowed a flourish of political and philosophical thought that subsequently defined western civilisation. It further explores the contrasts between Spartan and Athenian culture. The ideal preparation for the final examinations, all content is presented by experts and experienced teachers in a clear and accessible narrative. Ancient literary and visual sources are described and analysed, with supporting images. Helpful student features include study questions, further reading, and boxes focusing in on key people, events and terms. Practice questions and exam guidance prepare students for assessment. A Companion Website is available at www.bloomsbury.com/ anc-hist-as-a-level.