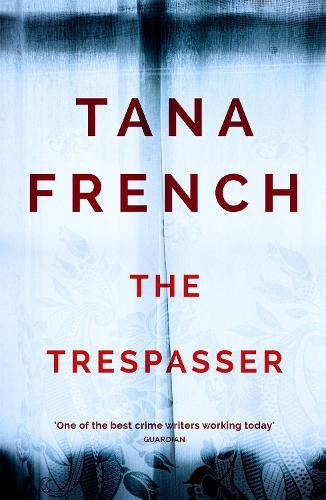 The case that will make Detective Antoinette Conway’s murder squad career. Or break it.
There’s the murder squad you set your sights on at the beginning: the one where you’re playing knife-edge mind-games with psychopathic geniuses. And there’s the one you actually work on. The night shifts. The vicious pranks that go too far. Sifting the dregs for the case that might just be special.
Tonight’s case isn’t it. Uniforms call it in as a slam-dunk domestic. Except when Conway takes a good look at the victim’s face, she realises she’s seen her somewhere before. And she knows there’s a different answer. And it takes her breath away.

The wonderful thing about Tana French’s Dublin Murder Squad series is that they’re all excellent, but all very different at the same time. Each book has enough familiarity to allow you to slip effortlessly into the story, but not so much that the books seem repetitive or cookie-cutter.

The Trespasser is the sixth book in the series, and the second to feature Detectives Antoinette Conway and Stephen Moran, whose partnership was in its infancy in The Secret Place. The acerbic Conway holds the reins in this new book, which is about a case that might not be the slam-dunk domestic violence crime that it at first appears to be. As Conway and Moran are drawn deeper into a web of secrets and conspiracies, it becomes clear that someone on the squad is determined to see them fail.

The Trespasser is a twisty, hard-edged thriller that leaves you feeling uneasy and on edge and desperate to find out where the line lies between truth and fiction.