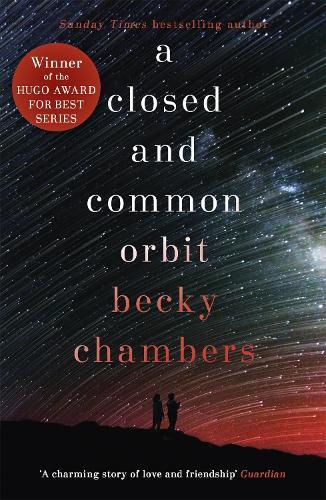 The stand-alone sequel to the award-winning The Long Way to a Small, Angry Planet.
Lovelace was once merely a ship’s artificial intelligence. When she wakes up in an new body, following a total system shut-down and reboot, she has to start over in a synthetic body, in a world where her kind are illegal. She’s never felt so alone.
But she’s not alone, not really. Pepper, one of the engineers who risked life and limb to reinstall Lovelace, is determined to help her adjust to her new world. Because Pepper knows a thing or two about starting over.
Together, Pepper and Lovey will discover that, huge as the galaxy may be, it’s anything but empty.

Lovey has been ripped away from the Wayfarer and dumped in a kit shaped like a human woman. This is a problem because as a ship’s AI Lovey was a ‘solid sphere of unblinking perception’; she had instant and complete access to all collected sapient knowledge through the Linkings; she had a purpose. Now in the ‘kit’ and with a new name, Sidra, her vision is a narrow cone fixed straight ahead. She has one pair of eyes and ears and an entire planet of loud, visually overstimulating data to input. Sidra clearly feels uncomfortable in her new body and right to the end of the book Chambers lets us know through her writing. It’s never ‘Sidra sighed’ it’s always ‘the kit sighed’ and it’s so effective that you find yourself shifting uncomfortably when you read as if suddenly your own body doesn’t fit you.

When I started writing this review I found myself comparing Lovey/Sidra to Hal from 2001: A Space Odyssey and Pepper to every clone I ever have ever read in science fiction or watched but the truth is Sidra the AI and Pepper the human clone are entirely unique. They’re not like anything I’ve seen in pop culture before, they are too real – they don’t want drama, because no-one does; there are no convenient misunderstandings because throughout the whole book they both do their best to empathise with what each other is going through. They want to be happy but not at the expense of their friend’s happiness. A Closed and Common Orbit really stands out in its genre.

Record of a Spaceborn Few: Wayfarers 3

The Long Way to a Small, Angry Planet: Wayfarers 1

When Rosemary Harper joins the crew of the Wayfarer, she isn't expecting much. The Wayfarer, a patched-up ship that's seen better days, offers her everything she could possibly want: a small, quiet spot to call home for a while,...