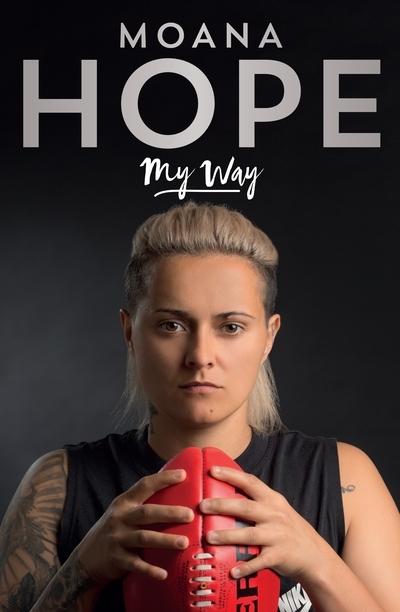 Moana Hope is one of fourteen children. No fan of dolls or dresses, footy has always been her passion, and she would spend hours playing kick-to-kick with her dad and brothers at the local park. When her father was diagnosed with terminal cancer, Moana cared for him until his death four years later.
Footy and cricket provided an escape from the demands of domestic life, and she made state and national teams for both sports. She also began to explore her Maori heritage, getting tattoos that represented the dearest people in her life.
But as women’s football became more popular, being good at the game wasn’t enough—players started being pressured about the way they looked. Moana refused to grow her hair or cover her tatts, and for the first time in her life felt sidelined by the game. But later, inspired by a women’s exhibition game, she realised what she was missing and returned with gusto to the game she loved.
As a powerful full-forward who can thrill crowds by taking big marks and kicking spectacular goals, Moana was signed by Collingwood as one of its two marquee players for the inaugural AFL Women’s competition in 2017.
A high-flying athlete who is grounded by remarkable selflessness, Moana Hope is an inspiration for women and girls everywhere. My Way is her story.
$27.99Add to basket ›