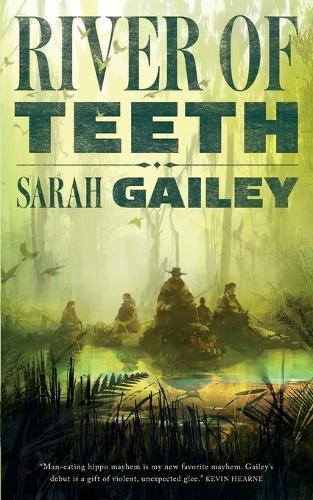 River of Teeth by Sarah Gailey goes beyond the truth to an alternate wild west in which hippos rule the colossal swamp that was once the Mississippi River. Fans of weird westerns and alternate histories alike will embrace debut author Sarah Gailey as she delivers a rip-roaring adventure. In the early 20th Century, the United States government concocted a plan to import hippopotamuses into the marshlands of Louisiana to be bred and slaughtered as an alternative meat source. This is true. Other true things about hippos: they are savage, they are fast, and their jaws can snap a man in two. This was a terrible plan. Contained within this volume is an 1890s America that might have been: a bayou overrun by feral hippos and mercenary hippo wranglers from around the globe. It is the story of Winslow Houndstooth and his crew. It is the story of their fortunes. It is the story of his revenge.