Too Important for the Generals: Losing and Winning the First World War 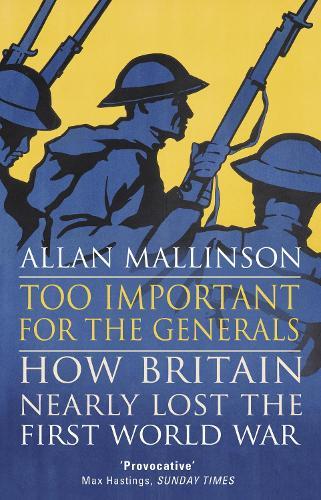 Too Important for the Generals: Losing and Winning the First World War

Published as the world marks the centenary of one of the most infamous battles of the First World War, the Somme, this powerfully-argued and polemical new history of the war by one of Britain’s most respected military historians explores how the war was fought, how near we came to losing it - and why winning proved so costly and why the Allied generals and politicians failed to find a less bloody strategy for victory. ‘War is too important to be left to the generals’ snapped future French prime minister Georges Clemenceau on learning of yet another bloody and futile offensive on the Western Front. One of the great questions in the ongoing discussions and debate about the First World War is why did winning take so long and exact so appalling a human cost? After all this was a fight that, we were told, would be over by Christmas. Now, in his major new history, Allan Mallinson, former professional soldier and author of the acclaimed 1914- Fight the Good Fight, provides answers that are disturbing as well as controversial, and have a contemporary resonance. He disputes the growing consensus among historians that British generals were not to blame for the losses and setbacks in the ‘war to end all wars’ - that, given the magnitude of their task, they did as well anyone could have. He takes issue with the popular view that the ‘amateur’ opinions on strategy of politicians such as Lloyd George and, especially, Winston Churchill, prolonged the war and increased the death toll. On the contrary, he argues, even before the war began Churchill had a far more realistic, intelligent and humane grasp of strategy than any of the admirals or generals, while very few senior officers - including Sir Douglas Haig - were up to the intellectual challenge of waging war on this scale. And he repudiates the received notion that Churchill’s stature as a wartime prime minister after 1940 owes much to the lessons he learned from his First World War ‘mistakes’ - notably the Dardanelles campaign - maintaining that in fact Churchill’s achievement in the Second World War owes much to the thwarting of his better strategic judgement by the ‘professionals’ in the First - and his determination that this would not be repeated. Mallinson argues that from day one of the war Britain was wrong-footed by absurdly faulty French military doctrine and paid, as a result, an unnecessarily high price in casualties. He shows that Lloyd George understood only too well the catastrophically dysfunctional condition of military policy-making and struggled against the weight of military opposition to fix it. And he asserts that both the British and the French failed to appreciate what the Americans' contribution to victory could be - and, after the war, to acknowledge fully what it had actually been.