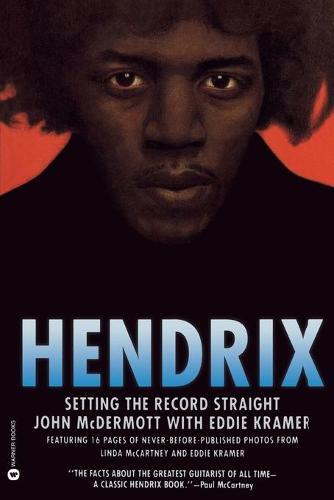 Seven years in the making, this is the complete account of the career, music and legacy of Jimi Hendrix, based entirely on first-person recollections and new, exlusive photographs and documents. Since the death in 1970 at the age of twenty seven, Jimi Hendrix has been mythologised as a risk-taker who lost it all - and not the serious musician whose sole desire was to play and write great msuci. Now, authors John McDermott and Eddie Kramer (Jimi’s long time producer) set the record straight. From Jimi’s Greenwich Village days to his Electric Ladybird nights, they chronicle the innovative techniques of a pioneer who painstakingly worked to perfect the sounds others couldn’t even imagine, despite being modest to the point of shyness about his own singing talent. Key figures in his inner circle such as his manager Chas Chandler shed light on Jimi’s whirlwind three-and-a-half year career.Hendrix: Setting the Record Straight is the definitive biography of a legend whose recording career transformed the essence of rock and roll.