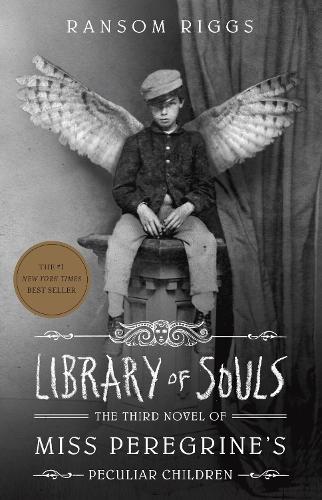 The New York Times #1 best-selling series. The movie adaptation of Miss Peregrine’s Home for Peculiar Children is in theaters September 2016. A boy with extraordinary powers. An army of deadly monsters. An epic battle for the future of peculiardom. The adventure that began with Miss Peregrine’s Home for Peculiar Children and continued in Hollow City comes to a thrilling conclusion with Library of Souls. As the story opens, sixteen-year-old Jacob discovers a powerful new ability, and soon he’s diving through history to rescue his peculiar companions from a heavily guarded fortress. Accompanying Jacob on his journey are Emma Bloom, a girl with fire at her fingertips, and Addison MacHenry, a dog with a nose for sniffing out lost children. They’ll travel from modern-day London to the labyrinthine alleys of Devil’s Acre, the most wretched slum in all of Victorian England. It’s a place where the fate of peculiar children everywhere will be decided once and for all. Like its predecessors, Library of Souls blends thrilling fantasy with never-before-published vintage photography to create a one-of-a-kind reading experience. From the Hardcover edition.

END_OF_DOCUMENT_TOKEN_TO_BE_REPLACED

Miss Peregrine's Peculiar Children has remained on the US bestseller list for 14 weeks and has sold over 27,000 copies in the UK

When a madman is on the loose and Miss Peregrine in peril, Peculiar Children Jacob Portman and Emma Bloom stage rescue missions, meet new allies, and face great dangers.

Tales of the Peculiar

Before Miss Peregrine gave them a home, the story of peculiars was written in the Tales. . . Author Riggs invites you to share his secrets of peculiar history with [this] collection of of original stories. --

This three-book set contains the complete Miss Peregrine trilogy--Miss Peregrine's Home for Peculiar Children, Hollow City, and The Library of Souls --in a handsome gift box.