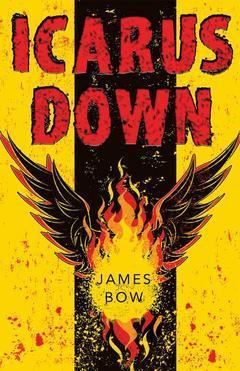 Three generations after the crash of the colony ship Icarus, Iapyx is barely hanging on: one of thirteen cities suspended halfway down deep chasms. The sun on the diamond lands above will kill a man in less than five minutes. The ticktock monsters in the fog forest below are a little slower - but quite a bit smarter. An electromagnetic wash has disabled the computers, the radios, even the lightbulbs. It’s the steam and clockwork age reborn: a careful society, rationed and stratified.
Which suits Simon Daud just fine.
Simon likes the rules, and knows his place - in the shadow of his older brother, Isaac. All he wants is to earn his wings as an ornithopter pilot and get to work in the flight bays. But on his final test flight, something goes wrong. Isaac is killed. Simon is burned; his body will never be the same.
Neither will his world. Not everything in Iapyx is quite as it seems, and through his rehabilitation Simon falls into the middle of a conspiracy that will bring everything he’s ever known to the ground. Down in the fog forest, monsters await - but so does the truth … if Simon can survive long enough to find it.
$16.99Add to basket ›