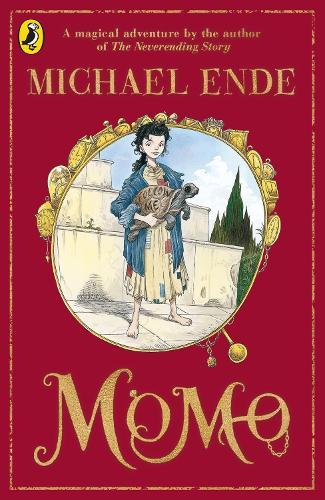 In a ruined amphitheatre on the outskirts of a city lives a strange, ragged girl, Momo, who meets a compelling grey gentleman.
A chilling fantasy. Age 11+

German author Michael Ende might be better known for his novel The Neverending Story, but it is the sweet and magical Momo that holds first place in my heart. Momo is a surreal (and at times creepy) fantasy about time theft, starring a very charming heroine.

The mysterious Momo sets up camp in an abandoned amphitheatre in a city that resembles Rome, and is adopted by concerned locals. Momo is ageless, wise, without possessions and thoroughly enigmatic (‘I’ve always been around’ she says, when asked where she was born). Momo soon enchants the adults with her superior listening skills, and the children with her powers of make-believe. This updated cover is by my favourite illustrator, Chris Riddell, but the cover I remember from my childhood attracted me with Momo’s black hair and brown skin – a rare sight on kids’ books in the 1980s.

The story takes a sinister turn when grey-suited, grey-skinned businessmen infiltrate the relaxed city, urging citizens to work harder and play less, so they might deposit their ‘saved time’ in the Timesavings Bank. This kind of drab, workaholic attitude does not play with our in-the-moment Momo, and when it becomes apparent that the Men In Grey’s savings scheme is literally sucking the city dry of spare time, it is up to her to save the day.

Momo is full of imagination and bravery and friendship, and has an important message for modern readers in a time-poor and overscheduled world.