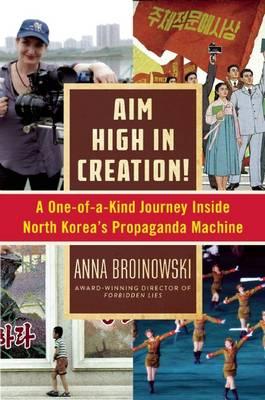 An Authentic Glimpse of a North Korea We’ve Never Seen Before, by a Prize-Winning Filmmaker Anna Broinowski is the only Westerner ever granted full access to North Korea’s propaganda machine, its film industry. Aim High in Creation! is her funny, surreal, insightful account of her twenty-one-day apprenticeship there. At the same time it is a fresh-eyed look, beyond stereotypes, at life in that most secretive of societies. When Anna learned that fracking had invaded downtown Sydney and a coal seam gas well was planned for Sydney Park, she had a brilliant idea: she would seek guidance for a kryptonite-powerful anti-fracking movie from the world’s greatest propaganda factory, apart from Hollywood. After two years of trying, she was allowed to make her case in Pyongyang and was granted full permission to film. She worked closely with the leading lights of North Korean cinema, even playing an American in a military thriller. Filmmakers are family, Kim Jong-il’s favorite director told her, and a love of nature and humanity unites peoples. Interviewing loyalists and defectors alike, Anna explored the society she encountered. She offers vivid, sometimes hilarious descriptions of bizarre disconnects and warm friendships in a world without advertisements or commercial culture. Her book, like the prize-winning documentary that resulted from her visit, is a thoughtful plea for better understanding. Skyhorse Publishing, as well as our Arcade imprint, are proud to publish a broad range of books for readers interested in history–books about World War II, the Third Reich, Hitler and his henchmen, the JFK assassination, conspiracies, the American Civil War, the American Revolution, gladiators, Vikings, ancient Rome, medieval times, the old West, and much more. While not every title we publish becomes a New York Times bestseller or a national bestseller, we are committed to books on subjects that are sometimes overlooked and to authors whose work might not otherwise find a home.