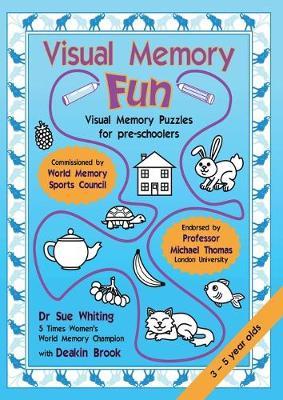 This book of photocopiable puzzles, that may be used in the classroom and at home, is the result of a request from the World Memory Sports Council (WMSC), the governing body for the World Memory Championships (WMC), to create an international memory competition for pre-schoolers. I decided from the outset that it needed to be fun, stress-free and independent of language: not only for the young pre-reading age children but also for the parent/teacher guiding them. Visual memory training is nothing new. The Ancient Greeks valued it highly but until recently it seems to have been seen as less important. Nowadays it appears increasingly to be a key skill, necessary for academic success. I know from my own experience, when I set a new world record for the Random Images discipline in the 1995 WMC, that visual memory is trainable. Latest neuroscience research indicates it may be advisable to guide all children to develop their visual memories. Working memory is now considered a better predictor of academic success than IQ. There are four photocopiable groups of these puzzles to be completed over a four week period. For maximum benefit to the child, we strongly recommend that one group is completed every week, in a few short sessions. Due to their immature executive control part of the brain, young children are not able to switch from one task to another e.g. from drawing a circle around an object and then to stop doing the circles and switch to drawing lines from one object to another. This part of the brain, controlling task switching, does not mature until they are about five years old. The lay out in the book has therefore been designed with the young child in mind by arranging similar puzzles together. If a child wishes to do further puzzles once he has finished a particular set, it is recommended that he takes a short break. He will otherwise find it very difficult to switch to the second task. The competition may be found at http: //www.worldmemorychampionships.com/. Once registered, participating pre-schools and nurseries will supervise the ‘competition’ and have the option of awarding certificates to their children. I am very grateful to Michael Thomas Professor of Cognitive Neuroscience and Director of The Centre for Educational Neuroscience (CEN), London University for all his advice concerning the development of a child’s immature executive function of the brain. Sue Whiting