Susanna Moodie: Roughing It in the Bush 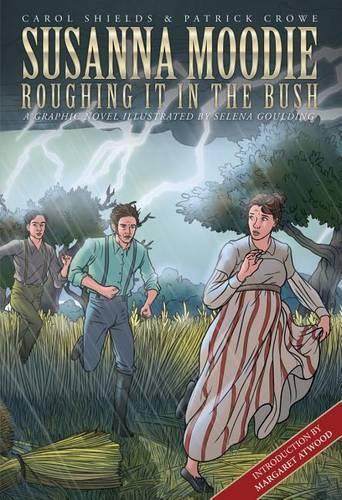 Susanna Moodie: Roughing It in the Bush

Carol Shields was fascinated by the life and writing of Susanna Moodie. Moodie was a Romantic writer from a celebrated literary family whose life changed forever when she and her husband left England for the backwoods of Canada in 1832. The Moodies, utterly unprepared for their new life, soon found themselves starving in the hostile wilderness of Upper Canada. Susanna began publishing her writing to feed and clothe her growing family. The result was the novel Roughing It in the Bush–an aggravated and acerbic testament to settler life that was praised in England but turned Moodie into a controversial figure in Canada. Two centuries later, Moodie is honored by many as an early feminist and literary pioneer. Shields' long fascination with Moodie led her to collaborate on a screenplay with Patrick Crowe, which has now found its way to the world as a graphic novel. A talented adaptation by Willow Dawson and emotionally complex illustrations by Selena Goulding bring the words of the controversial and fascinating Susanna Moodie to life through the insightful personality of Carol Shields. Includes a rousing introduction by Margaret Atwood.