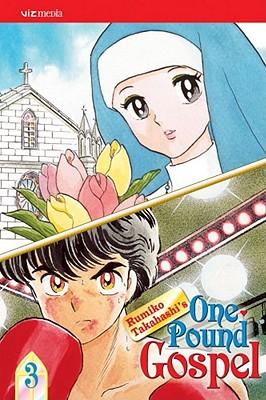 The highly anticipated conclusion to Rumiko Takahashi’s classic series One-Pound Gospel. Years in the making… There’s a new face around Mukaida’s gym–a wannabe teenage pugilist who’ll do anything to prove he’s got what it takes to be a fighter… So why is he always sucker punching coach Mukaida? Can Kosaku bounce back from a bout with food poisoning in time to correct this young tough’s bad attitude? Later, Kosaku strikes a bargain with Sister Angela. If he wins his next big eight-round fight, she’ll agree to spend Christmas with him. Sounds simple enough, so why is the Mother Abbess forbidding Kosaku from punching his opponent’s midsection? Could it have something to do with the Mexican fighter’s religious tattoo? Kosaku is a professional boxer whose constantly fluctuating weight, and inability to abstain from hearty food, is the bane of his coach’s existence. Sister Angela is a young, dedicated and fairly naive nun who catches Kosaku’s eye. Can her faith redeem Kosaku’s gluttony?