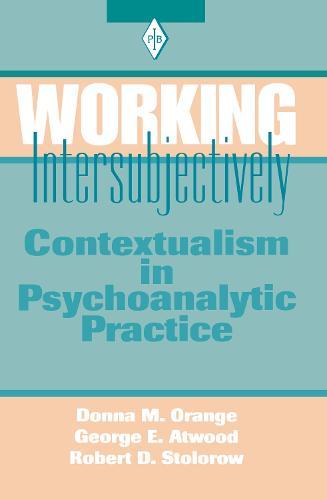 From an overview of the basic principles of intersubjectivity theory, Orange, Atwood, and Stolorow proceed to contextualist critiques of the concept of psychoanalytic technique and of the myth of analytic neutrality. They then examine the intersubjective contexts of extreme states of psychological disintegration, and conclude with an examination of what it means, philosophically and clinically, to think and work contextually. This lucidly written and cogently argued work is the next step in the development of intersubjectivity theory. In particular, it is a clinically grounded continuation of Stolorow and Atwood’s Contexts of Being (TAP, 1992), which reconceptualized four foundational pillars of psychoanalytic theory – the unconscious, mind-body relations, trauma, and fantasy – from an intersubjective perspective. Working Intersubjectively expounds and illustrates the contextualist sensibility that grows out of this reconceptualization. Like preceding volumes in the Psychoanalytic Inquiry Book Series by Robert Stolorow and his colleagues, it will be theoretically challenging and clinically useful to a wide readership of psychoanalysts and psychoanalytically informed psychotherapists.