The Tempest: And the Voices O the Abbey Waas 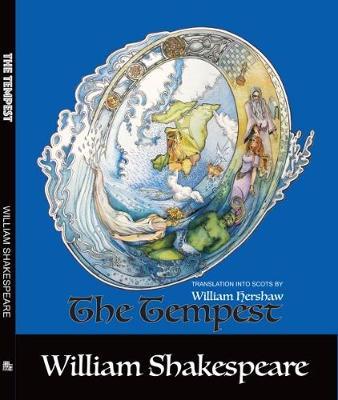 The Tempest: And the Voices O the Abbey Waas

The Tempest by William Shakespeare,translated into Scots by William HershawPrize-winning poet William Hershaw has written a compelling Scots language version of WilliamShakespeare’s last play The Tempest. It is set in Scotland during a regency period where powerful nobles form alliances to win power. Prospero, the book obsessed Earl of Fife, is usurped by his treacherous brother Antonio who has made a pact with the Duke of Argylle. Prospero and his young daughter Miranda are cast adrift and left for dead in the North Sea but they find refuge on a remote enchanted island. Here Prospero perfects his sorcerer’s powers to such an extent that twelve years later he is able to summon a storm that shipwrecks his enemies and leaves them at his mercy. From this choice between revenge and reconciliation a wonderful love story grows …William Hershaw’s play will fascinate anyone who is interested in Shakespeare, Scots language or simply who loves a good story well told. It is a play that will go down particularly well in the classroom at Higher and National 5 level where the range of characters (including the reluctant coal miner Caliban and the freedom seeking spirit Ariel) and range of engaging themes make it a text that will tick many teacher’s boxes. Hershaw’s presentation of the Scots language is readable and accessible.Included with William Hershaw’s Tempest is The Voices O The Abbey Waas, a play set in haunted Dunfermline Abbey where the troubled consciences of Andrew Carnegie and a mine explosion survivor from Valleyfield colliery are brought together in the afterlife by the medieval poet Robert Henryson to settle their differences.