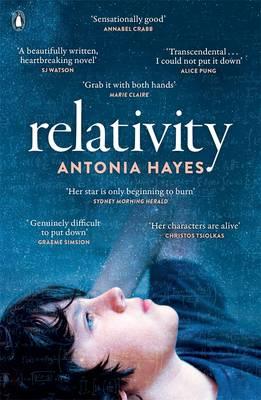 Ethan is a bright young boy obsessed with physics and astronomy who lives with his mother, Claire. Claire has been a wonderful parent to Ethan, but he’s becoming increasingly curious about his father’s absence in his life, wanting to fill in the gaps.
Claire’s life is centred on Ethan; she is fiercely protective of her talented, vulnerable son, and of her own feelings. When Ethan falls ill, tied to a tragic event from when he was a baby, Claire’s tightly held world is split open. On the other side of the country, Mark is trying to forget about the events that tore his family apart. Then a sudden and unexpected call home forces him to confront his past, and the hole in his life that was once filled with his wife Claire and his son Ethan.
When Ethan secretly intercepts a letter from Mark to Claire, he unleashes long-suppressed forces that u like gravity u pull the three together again, testing the limits of love and forgiveness.

Panic, like pain, is hard to remember after it passes. Hayes pulls you into the moment like you’ve unexpectedly pin-dropped through Antarctic ice. Having seized your attention, she then introduces the three main characters of Relativity, a little more than twelve years after the tragic incident that first changed all their lives.

Claire was a professional ballet dancer; now she works for the Sydney Ballet Company in corporate relations. Mark was a theoretical physicist, but for the last few years he’s been avoiding the past in WA. Their son, Ethan – gifted, impish, lonely and twelve – has begun asking questions about the father he can’t remember. All three are still grappling with the fallout from the tragedy, even if Ethan, like the reader, does not yet know what happened. When a letter arrives, it sets off a chain of events that will change everything again.

To say more would be to spoil things, but the fabric of this story flexes and bends around a contentious central issue as we hear from each of these protagonists. Ethan, who loves to interpret the world through physics and astronomy, shifts his focus back and forth between the immediate and the theoretical. As he precociously tests his theories, so too are the reader’s assumptions and perceptions tested. The exhilaration of pushing the boundaries of knowledge is juxtaposed against the potential futility of trying to quantify the ephemeral. Rather than running alongside the story, these preoccupations shape the characters’ attempts to make sense of their lives, and inform the reader’s eager guesswork. Relativity upends expectations and holds you in its thrall as Hayes asks unsettling questions about the frailties of memory and love.

Relativity has been likened to A Beautiful Mind and The Curious Incident of the Dog in the Night-time, both of which are apt comparisons. However, with its suspenseful plot and frequent lens changes, Christos Tsiolkas’ The Slap also comes to mind. An Australian debut not to be missed.