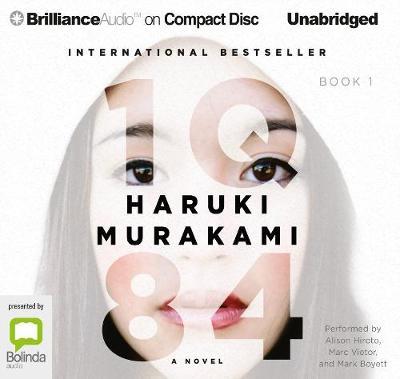 The year is 1984. Aomame sits in a taxi on the expressway in Tokyo. Her work is not the kind which can be discussed in public but she is in a hurry to carry out an assignment and, with the traffic at a stand-still, the driver proposes a solution. She agrees, but as a result of her actions starts to feel increasingly detached from the real world. She has been on a top-secret mission, and her next job will lead her to encounter the apparently superhuman founder of a religious cult. Meanwhile, Tengo is leading a nondescript life but wishes to become a writer. He inadvertently becomes involved in a strange affair surrounding a literary prize to which a mysterious seventeen-year-old girl has submitted her remarkable first novel. It seems to be based on her own experiences and moves readers in unusual ways. Can her story really be true? Both Aomame and Tengo notice that the world has grown strange; both realise that they are indispensable to each other. While their stories influence one another, at times by accident and at times intentionally, the two come closer and closer to intertwining. The year is 1984. In a parallel world, the year is 1Q84. This is the real world, there is no doubt about that. But in this world, there are two moons in the sky. In this world, the fates of two people, Tengo and Aomame, are closely intertwined. They are each, in their own way, doing something very dangerous. And in this world, there seems no way to save them both. Something extraordinary is starting. Book Two of 1Q84 ended with Aomame standing on the Metropolitan Expressway with a gun between her lips. She knows she is being hunted, and that she has put herself in terrible danger in order to save the man she loves. But things are moving forward, and Aomame does not yet know that she and Tengo are more closely bound than ever. Tengo is searching for Aomame, and he must find her before this world’s rules loosen up too much. He must find her before someone else does.