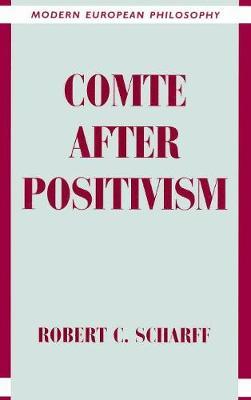 This book provides a detailed, systematic reconsideration of the neglected nineteenth-century positivist Auguste Comte. Apart from offering an accurate account of what Comte actually wrote, the book argues that Comte’s positivism has never had greater contemporary relevance than now. The aim of the first part of the book is to rescue Comte from the influential misinterpretation of his work by John Stuart Mill. The second part argues that this deep historically-minded concern with the tradition of philosophy for current philosophical practice places Comte in the same camp as such well-known post-positivists as Richard Rorty, Charles Taylor, and Hilary Putnam. Professor Scharff concludes that, even though he was the first positivist, Comte is also the only positivist who retains his relevance today.