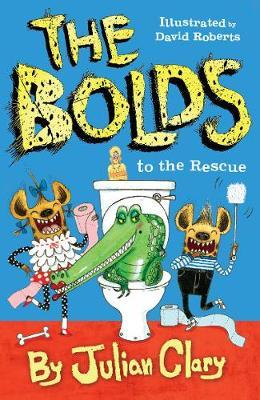 More wildly funny animal madness from dream team Julian Clary and David Roberts!
The Bolds are a family of hyenas living as humans in a suburban house. But now their kindness to animal waifs and strays has become legendary, and more and more animals keep turning up to stay! Roger the sheep flocks to their house, and Fifi the poodle turns up to learn some new tricks, whilst Sheila the crocodile decides to stay for a while. But when the Bolds take in a couple of race horses who are on the run, they worry their animal magnetism is getting to be too much. Have these hyenas bitten off more than they can chew?

Our favourite, outrageous, animal family from Fairfield Road have returned in this Julian Clary sequel! The Bolds to the Rescue reunites readers with the hilarious hyena family of four, along with introducing a gallery of new friends who dream of breaking free from animal limits and embracing the human world. The Bolds’ household is hence transformed into a side-splitting school that aims to introduce these troubled and diverse characters into a new environment.

From singing poodles to pantless rams, author Julian Clary and illustrator David Roberts will have both children and parents addicted to an entertaining and exciting storyline – a storyline that was not worth putting down! Not only does this new story maintain the laugh-outloud antics of the previous novel, but it also has subtle undertones for young readers about the importance of accepting others and being themselves.

Andrew Borg works as a bookseller at Readings Malvern.

END_OF_DOCUMENT_TOKEN_TO_BE_REPLACED

Life According To Dani

The Bad Guys Episode 4: Attack of the Zittens